Some recent correspondence on the French Facel site highlights the problems facing the restorer. It concerns prices for the windscreen washer bottle, a glass receptacle called Lavglace which sits in a black metal framework. The French point out that it was used on several French cars in the fifties. It can be called Bol Vase Expansion en Verre pour lave… 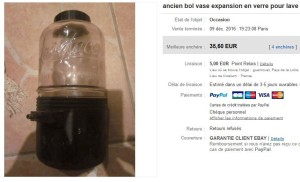 On the French site they copied in an e-bay advertisement from the States where this item is for sale at $1650 which is around £1320, quite a lot for a glass jar. One of the French readers pointed out that he bought one for €10; another said he’d found one recently for €36.60 plus €5 postage and packing, quite a difference from $1650.

Now you can get a plastic equivalent for an MGB for around £8 from Tudor on e-bay. And just to show that you can get these fairly cheaply even when newly made, the German site advertises a brand new brake fluid reservoir for €98 – not the same thing, sure, but very similar.

However my favourite item on e-bay recently was an empty – yes, empty – plastic box for a Solido Facellia which was priced at £1.45 – although the postage and packaging for this empty box was £3.50. As a friend of mine would say, ‘has the world gone made?’