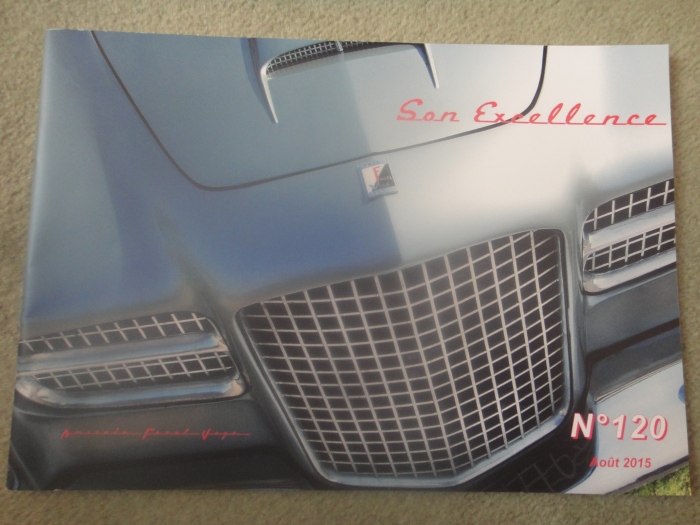 In the most recent Son Excellence, the French Facel Vega club’s extremely professional magazine, they write that 2015 has been a record-breaking year. ‘Never, since the founding of the Amicale in 1975, have we registered so many new members,’ going on to say that 68 new members joined in 2015, making a total of over 640 active members in total.

In fact more than twice that number have been members at one time or another, and I am one of those who has recently rejoined the Amicale, but some 60 members have been with the club for 30 years or more. Their data is really detailed and they have representatives in many regions throughout France of course, but also in Holland, Belgium, the USA, Great Britain, Switzerland, north and south Germany, Australia and Spain.

The geographical list of members makes interesting reading too. There are 145 members from the Paris region, and 359 from the rest of France. There is one member from Austria and 17 from Belgium, 22 from Switzerland, 31 from Germany, seven from Spain, three from Finland, one from Italy, three from Luxembourg, two from Monaco, one from Norway, 15 from Holland, one from Poland and two from the Czech Republic. Further from home, there are three in Australia, one in Canada, one in Hong Kong, one in the UAE and 23 in the United States.

There are also 13 members from the UK, where the club is somewhat dormant currently. We have over thirty members in the Facel Vega Car Club but the relationship with members is a little stagnant, although there are always members who seek information about their cars and particularly where they might source spares, so a club is always of use. It just needs to be supported.

In the Amicale’s statistics, there are breakdowns of who owns which car and even which Amicale owner used to own it. They can therefore trace 352 of the V8-engined cars and 465 of the smaller-engined cars. Then there are owners of Facel-made Simca, Ford Comete, Bentley and Delahaye cars. They can therefore trace 859 cars in total. Of course, there are more cars that are not owned by club members but at least they can talk about the majority that are. A remarkable number; well done the Amicale.