It’s that time of the year again, Retromobile, when some of the big auction houses hold major sales to coincide with France’s major classic car show and as usual, there’s a fair smattering of Facel Vegas for sale in amongst a fabulous array of cars. I don’t want to make this site one that just announces cars for sale, but there are some interesting cars here, so I make no apologies – on this occasion – for mentioning all these left hand drive cars.

There are three auctions, beginning with RM/Sothebys on February 3, then Bonhams at the Grand Palais on February 4, and the French auction house Artcurial on February 5; the latter proved to be the most entertaining to listen to last year.

And it is Artcurial who have the most important Facel of the three days. It is the Daddy of them all, the very first Facel Vega ever produced: Vega 54 prototype V par Facel. Its chassis number is FV-54-0002. The build was started in 1952 in the Facel prototype workshop and the car then sent to Detroit for Chrysler to test – they would eventually supply Facel with all their V8 engines. It finally received type approval in France on August 10, 1954, was registered two days later and would remain the personal transport of Facel founder Jean Daninos for another two years. 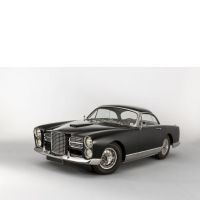 It is an intriguing machine in many ways. The rear boot lid sets into the bumper and other parts slot beneath the rear windscreen. It has a side facing rear seat, or this area can be reconfigured for luggage. There is a cosmetic package in each door, comprising hair brush and comb, mirror and two scent bottles and it has the wood effect metal dashboard.

This was the Paris Motor Show car in October 1954, originally in light blue grey with a Brunswick blue roof. It has its original V8 DeSoto Firedome 4528cc engine, plus four speed Pont-a-Mousson gearbox and it is in beautiful condition. It will be sold as Lot 133 with an estimate of €350-550,000.

Artcurial is also selling a pair of FV4s which were both exported to dealer Hoffman in the United States. Lot 132 is the eighth FV4 of 36 produced to be exported and has a 5.8 litre Chrysler giving 340 bhp. It spent 35 years in northern California, benefitted from a four year restoration and subsequently won three concours events. It has latterly lived in Switzerland. Its estimate is €130-190,000.

Lot 214 has a Dutch title and was restored in 1998. This FV4 has the Typhoon 6 Chrysler, giving 375bhp and was originally yellow with a black interior, but on returning to Europe, was restored by Facel specialist Ian Webb in Cornwall. Its estimate is slightly higher at €175-200,000.

Artcurial has an HK500 to sell as well, at lot 128. The car has been in the same ownership since 1978 and although the mechanicals were overhauled about ten years, it is basically un-restored and in superb original condition. Its estimate is €100-150,000.

Before the Arturial sale is RM/Sothebys where they are selling a Facel 11 which has been in the same Greek family since the lady buyer drove it off Facel’s stand at the end of the 1963 Geneva Motor Show. The automatic car looks great, having done only 20,601 miles. There is no estimate on this car at the moment.

Similarly, there is no lot number for Bonhams’ 1961 HK500 although the estimate for this unrestored automatic is £100-130,000. It has a rare factory sliding roof and has done 79,850kms, in the same family for the last fifty years. It sat for some years at Orly airport, seemingly abandoned, until spotted by an American Airlines pilot who bought it as having been abandoned and shipped it to the USA.

So six Facels for sale: the first ever prototype, two FV4s, two HK500s and a Facel 11, all left hand drive, all in reasonably good condition and if only reasonable, then original with excellent patina. Let’s hope they find good homes but there’s a lot of tasty machinery on offer for any investor.

And don’t forget, even if you’re not buying a Facel, you can always go and talk about them at the Amicale Facel Vega stand in Retromobile itself.