Anyone who has owned any Facel Vega will appreciate that the number of seats advertised is incidental to the truth and practicability of those seats. Try and fit a person in the back of a Facellia, for instance, and he or she will have to lie lengthways. It’s virtually the same with a Facel 11; you certainly can’t put your feet on the ground unless your knees are up by your chin. In fact it would be better if you didn’t have any legs at all or your age was in single figures.

When talking of the four door, four seater Excellence, Jean Daninos said that he never really wanted to make a four seater at all, but was pressured into doing so. Well, if you’ve owned one, even that’s a mute point. He can scarcely boast of achieving that aim. Take a look at some of the publicity pics – with or without passengers – and you’ll see that the driver is probably sitting very close to the steering wheel even if there’s no-one in the back at all.

So in restoring my Excellence, I was scarcely expecting to furnish myself with the four seater limousine that I was hoping for when I bought it all those years ago. I’m at a stage where I’m looking at the ‘woodwork’, that’s the painted metal bits including the back of the front seats where the so-called rear seat passengers might enjoy tray tables and the perfume bottles.

However, imagine my surprise when I looked at the attached publicity pics. They show the one ‘tray table’ actually becoming a foot rest for the rear seat passenger, with the front passenger seat folded forward. And look at the driver, right up behind his steering wheel and probably scarcely any room behind for a third passenger. 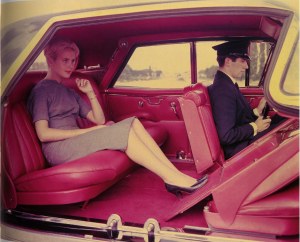 So once again, in spite of the four doors, Daninos created a 2+ 1/2 : a driver and a rear seat passenger, with scarcely room for a third passenger behind the driver and definitely no room for a fourth. Such are the vagaries of Facel Vega ownership!