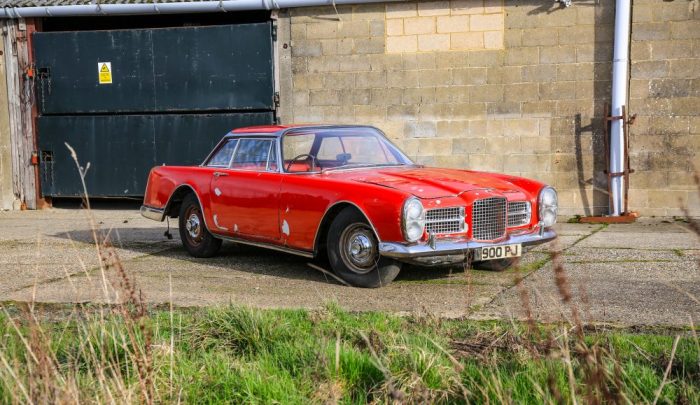 It’s not often that a Facel 11 is offered for sale in the UK but chassis A172 comes up at Historics auction at Ascot in Berkshire on March 2. The car needs total restoration but looks complete. It is estimated at £135-165,000.

Chassis number A172 has led an interesting life. It was shown at the London Motor Show in 1963 in its original colour of Dover Grey, sometimes known as primer! The interior was red leather and it had disc rather than wire wheels. It was fitted with the Torqueflite automatic gearbox.

Intercontinental Cars – against their better judgement – sold the car on hire purchase to John Bellord, who, with Jim Miller (aka Sydney) ran Honeywood House nursing home near Horsham in Sussex. The intensely religious pair were hire purchase fraudsters who later went to goal for their part in the Southern Organs HP scam, a tale excellently told by Geoff Green in his on-line book Paying for the Past.

The car later passed through the hands of the famous racing driver Roy Salvadori into the ownership of Jon Wilson, a nightclub bouncer who offered the car for sale from his cell in Cardiff prison. Its most recent long term owner for 26 years has been an MoT garage owner from Crawley (not so far from Horsham), who also had a Facel Vega Excellence. Among his sometime employees was a mechanic who is currently in goal for murder.

At some stage the car has been resprayed red and is currently registered 2900PJ. However, it is need of complete restoration. Its latest owner has estimated that it could be easily restored, particularly as all the parts are in place.

It is one of 26 right hand drive Facel Vegas to be imported into the UK by Intercontinental Cars – part of HWM of Walton-on-Thames – between January 1962 and March 1964, the last of which went to Ringo Starr. Of those 26, ten have left the country – including the latter car – six have been restored and another four are being restored. Four have been scrapped; the rest are in unknown condition.