As Glenn Hansford says in his ad on e-Bay, you don’t see a Facel for ages and then two come along at once. What he doesn’t boast of is that he’s been rather wise in jumping on the back of the £125,000 ‘three door’ ‘barn find’ HK500 (see preceding story) that is also on e-Bay at the moment by advertising his full restored similar car for just £50,000 more – which is considerably less than it will take to get the barn find up to the same standard.

Glenn used to run the largest amusement arcade in Britain – which is in Blackpool – but decided three years ago to get out of the rat race and indulge fulltime in his hobby of car restoration in his empty garage. Over the years, he’s restored a Mk2 Jaguar, an Alvis TE21, a couple of Astons, a Lotus Cortina and began it all with an AC Cobra replica back in 2000.

He is, as he says, a full-time amateur. He’s better at some aspects of car restoration than others. He can weld and deal with upholstery but calls in the experts to finish things off and up in Lancashire there seems a rich vein of talented specialists who can be called in to help.

Like many of us, he fell in love with Facel Vegas but it took him ten years to find one. He first saw HK-1 BP3 when it sold at auction at Brightwells for £15,000 in 2007 – only to be re-advertised a few weeks later by a well-known sometime Facel dealer for £25,000. It was originally delivered and sold new to a company called T&A Collins Ltd of Dudley in May 1960. The company were thought to manufacture shoes in Northampton, but there’s no sign of them any longer.

It actually retains many of its original features, including registration number of 891AYF and exterior paint in Peony Red and black leather interior with red piping. It’s an automatic with power steering, Dunlop disc brakes, 3.31 rear axle. HWM incorrectly recorded its chassis number  as BP5, a mistake perpetuated in the logbook for many years although the chassis is clearly marked BP3. The real BP5 was the only HK500 sold new to Ireland and has long since been scrapped. In late 1964 the car was sold to E. E. Jones of Birmingham and then passed through several other owners (including one who ran it at Santa Pod raceway where it clocked a 15 second quarter mile, outclassing a manual HK500). It was Roger Deadman who sold the car at Brightwells after 27 years ownership.

Interestingly, the Brightwells blurb says that it was the subject of a meticulous body-off rebuild during his time. The restored chassis was hot zinc sprayed then epoxy coated and the inside of every body panel was painted with red oxide and Hammerite. The engine was fully rebuilt with new pistons, a new radiator and stainless steel exhaust fitted and the Carter four-barrel carb rebuilt. Brakes, steering and suspension were all gone through and adjustable Spax shocks fitted to the front with Konis at the rear. The interior was fully retrimmed in the original black hide with red piping and the car was resprayed 12  years before in the original Peony Red.

The car had only covered around 2,000 miles since the engine was rebuilt,  including two trips to France. A large quantity of spares was available to the winning bidder if required, including a spare chassis with the registration number: 12 SPF. This was HK-1 BW9, formerly owned by Joyce Strickland-Skailes).

The car was bought unseen by Glenn Hansford from a German from Stuttgart who advertised it about four years ago – unseen although he had seen it at Brightwells and remembers it as being ‘very shabby. Structurally, the body and chassis were good,’ he says ‘ but whoever had done the work had no eye for detail.’

Glenn began working on the HK500 about six months ago and is nearing the finishing line within days. He’s basically gone over the whole car including a respray, new carpets, walnut burr veneer on the dashboard, a new windscreen and new wire wheels. He’s had the engine out, gearbox overhauled, back axle looked at, propshaft, brakes, rechromed, stainless steel polished. He’s a dab hand at sourcing parts as I discovered when he was searching for a starter relay for his automatic and he zoomed in on a picture of the engine bay of an original car, identified the starter relay and had found loads on American e-bay in minutes. 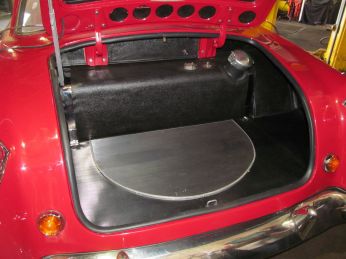 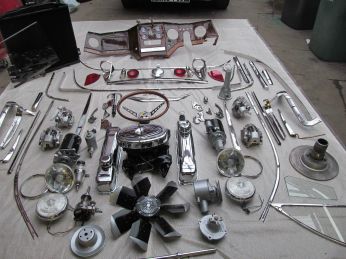 So now Glenn’s labour of love is up for sale; he can found on e-bay under Facel Vega HK500 or here: